The English Indices of Deprivation (ID) are a useful tool for targeting services to help tackle deprivation. They provide a means of identifying the most and least deprived areas (LSOAs) in England and to compare whether one area is more deprived than another.[1] The ID2019 was published in September 2019, to replace the previous ID2015.

The Index of Multiple Deprivation (IMD) is a measure of relative deprivation for small areas (Lower Super Output Areas (LSOAs). It is a combined measure of deprivation based on a total of 37 separate indicators that have been grouped into seven domains, each of which reflects a different aspect of deprivation experienced by individuals living in an area.

Every LSOA in England is given a score for each of the domains and a combined score for the overall index. This score is used to rank all the LSOAs in England from the most deprived to the least deprived, allowing users to identify how deprived areas are relative to others.

In addition, a Guidance Note and Frequently Asked Questions document can also be downloaded from the resource box.

Multiple deprivation in the national context[2]

Figure 1:  Maps showing the areas of Herefordshire that are among the most deprived nationally according to the Index of Multiple deprivation 2019. 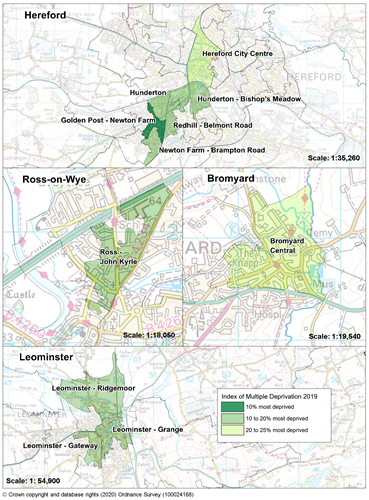 Out of 317 local authority districts in England, Herefordshire ranks between 137 and 152 depending on whether the ranking is derived by averaging the domain score or rank or by local population concentration or extent of deprivation, with one being the most deprived. See section 3.3 of the MHCLG’s Research Report for further details of the different measures used.

[1]Lower Super Output Areas (LSOAs) are fixed statistical geographies of about 1,500 people designed by the Office for National Statistics (ONS).

[2]National context means how a particular area compares in terms of deprivation relative to all LSOAs in England i.e. the national rank.