These three LSOAs are all located in the north of Hereford directly to the west of the A49 and are immediately adjacent to the Hereford air quality management area. It should be noted that of these three areas ‘Whitecross – Sainsbury’s’ and ‘Courtyard’ have become relatively less deprived since 2015.

Since 2015 ‘Hereford City Centre’ (also within the Hereford air quality management area) has also become relatively less deprived, moving from the 25% most deprived to the 50% least deprived areas nationally, which represents one of the largest improvements across the county since 2015. Similar improvement are evident elsewhere in Hereford.

The ‘outdoors’ living environment contains measures of air quality and road traffic accidents, it is derived from the following indicators:

Figure 1:  Map showing the areas of Herefordshire that are amongst the most deprived in England according to the outdoor living environment sub-domain of the IMD 2019. 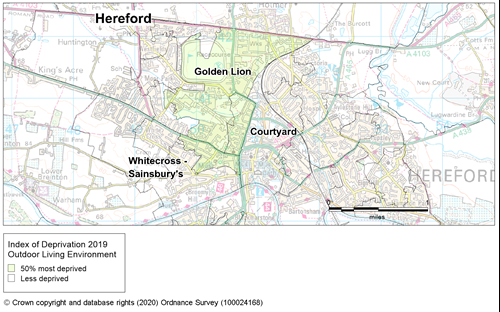