In 2016, the World Health Organization (WHO) estimated that worldwide, ambient air pollution contributes to 7.6% of all deaths[1] and other recent research has shown that more than 5.5 million people die prematurely every year due to household and outdoor air pollution. [2]

A report by the Royal College of Physicians, also in 2016, estimated that 'each year in the UK, around 40,000 deaths are attributable to exposure to outdoor air pollution, with more linked also to exposure to indoor pollutants'.[3]

The report highlighted how 'air pollution plays a role in many of the major health challenges of our day, and has been linked to cancer, asthma, stroke and heart disease, diabetes, obesity, and changes linked to dementia'.[3]

Generally, Herefordshire has low levels of air pollution - although there are still two air quality management areas where levels of nitrogen oxide are higher than government standards. Herefordshire's air quality problems are mainly related to traffic.

Mortality attributable to particulate air pollution is a Public Health protection indicator.  Figures for Herefordshire have remained relatively stable since 2010 (between four and five per cent of all deaths of those aged 30+) and are consistently below both national and regional figures. 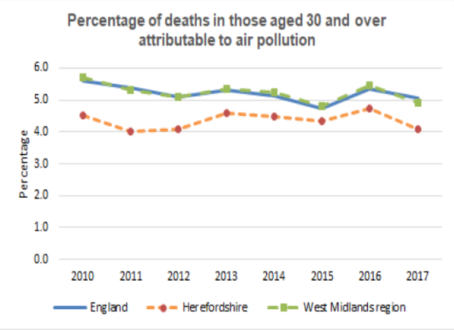 [3] Every breath we take: the lifelong impact of air pollution. Report of a working party, The Royal College of Physicians, 2018, p.xii.