There are 32 Herefordshire LSOAs [1] amongst the quarter most deprived in England in terms of children and young people’s education and skills – four more than in 2015.

These include 11 LSOAs which are within the 10% most deprived nationally, of which six are in south Hereford, one is in north Hereford, two in Leominster and one each in Ross-on-Wye and Bromyard.

Children and young people’s education and skills is the biggest issue for the county across the people-related domains (i.e. excluding barriers to housing & services and living environment) – with the largest number of areas in the most deprived nationally and the smallest in the least deprived.

This domain measures the lack of attainment and skills in the local population relating to children and young people and is made up of the following indicators:

Figure 1:  Maps showing the areas of Herefordshire that are amongst the most deprived in England according to the Children and Young People’s Education and Skills sub-domain. 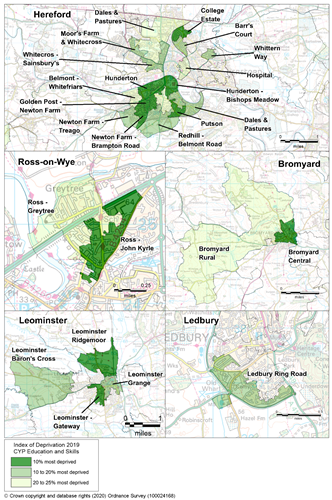