The income domain measures the proportion of the population in an LSOA [1] that live in income deprivation. The definition of low income used includes both people who are out-of-work and those who are in work but have low earnings (and who satisfy the respective means tests).

There are 10 LSOAs in Herefordshire that are amongst the 25% most deprived nationally in this domain, all having at least one in five people who live in income deprived households. Half of these areas are located in south Hereford, with a further three in Leominster and one each in Bromyard and Ross-on-Wye.

It is interesting to note that in nine out of ten of these areas the proportion of the population estimated as living in income deprived households has fallen since 2015, the exception being ‘John Kyrle’ where the proportion remains unchanged.

‘Golden Post – Newton Farm’ in Hereford and ‘Leominster Ridgemoor’ with respectively 29% and 28% of the population living in deprived households are within the 10% most deprived LSOAs in England.

There are 22 LSOAs across Herefordshire that are amongst the 25% least deprived nationally, with between 4% and 6% of their population living in income deprived households. These LSOAs are spread across the county with some in Hereford city and the market towns of Ledbury and Ross-on-Wye as well as a number in rural areas, although two thirds are within urban areas.

Figure 1: Maps showing the areas of Herefordshire that are amongst the most deprived nationally according to the income domain of the Indices of Deprivation 2019. 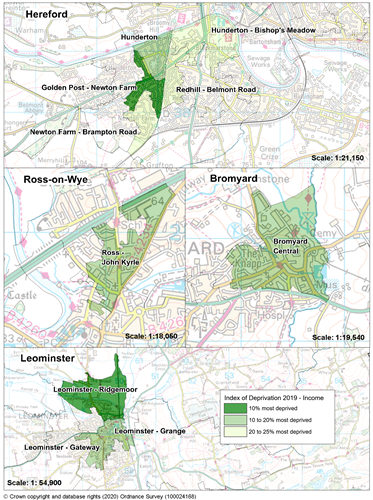