What people die of

The number of deaths recorded annually in Herefordshire remained relatively consistent between 1995 and 2013, although in subsequent years numbers increased - Figure 1. In 2018 there were 2,169 recorded deaths which is the highest annual number of death registrations in the county since the turn of the century.

It is anticipated that, as the population in Herefordshire is increasing in both size and age, the number of deaths recorded annually will continue to increase in the future. 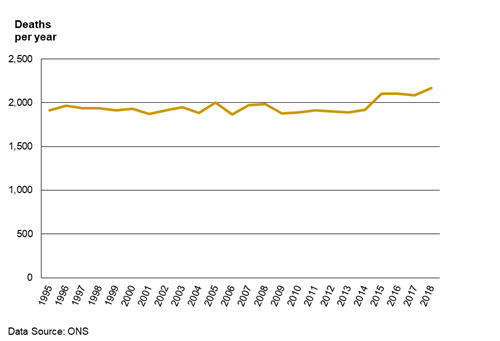 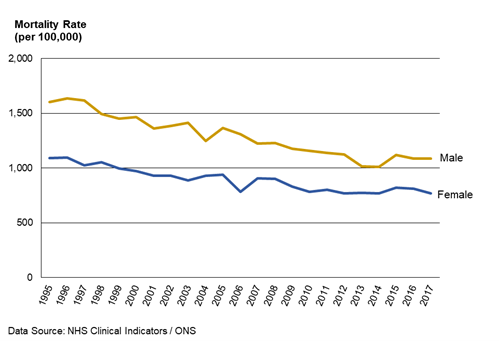 In 2017 the most common underlying causes of mortality in Herefordshire were cancer (605 deaths – 29.0%) and diseases of the circulatory system (589 deaths – 28.2%). Other causes of note were diseases of the respiratory system (274 deaths – 13.1%) and mental and behavioural disorders (193 deaths – 9.3%). The local proportions are similar to those recorded nationally.

Conversely, over this period the mortality rate for mental and behavioural disorders (e.g. dementia) has increased steadily with the 2017 figure (81.9 per 100,000) being three times higher than that recorded in 2008 (26.7 per 100,000). This increase is likely to be due to improvements in recognition, identification and diagnosis of these conditions.

These patterns are similar to those observed across England as a whole. 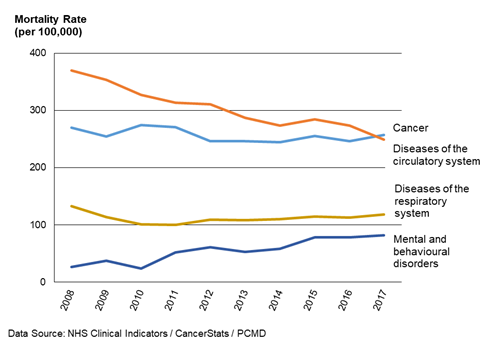 The premature mortality rates (i.e. for deaths occurring under the age of 75) for both males and females have shown a general fall since the turn of the century (Figure 4) and continue to be lower than the corresponding national figures. In 2015-17 the male rate was 376 per 100,000 while the female figure was 239 per 100,000 with the most common underlying causes being cancer (44%) and diseases of the circulatory system (25%). 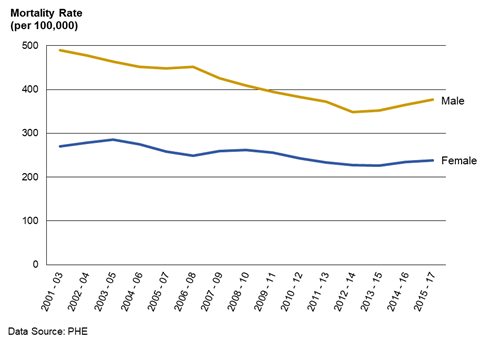 Infant deaths continue to vary, although not significantly

Since 2001-03 the number of infant deaths (i.e. occurring in those under one year) in Herefordshire has varied with the crude infant mortality rate fluctuating accordingly – Figure 5. The rate for 2015-17 of 4.8 per 1,000 is the fourth highest recorded over this period but it is not statistically different from any of the figures previously recorded this century. Throughout this period the local rate has been similar to that reported for England. 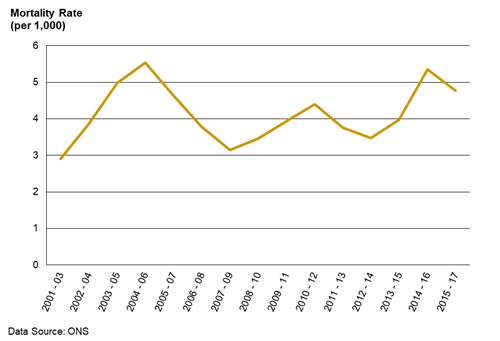