Crime deprivation is one of the domains that make up the Index of Multiple Deprivation 2019 (IMD 2019).

Since 2015 around one in six of Herefordshire LSOAs have become relatively more deprived in terms of crime deprivation, compared with around one in three that became relatively less deprived. The largest increases in relative deprivation are evident to the north and east of Hereford in ‘Bromyard Downs’ and ‘Greater Bosbury’. Of those LSOAs where crime deprivation has shown a relative improvement the greatest changes are evident in ‘Fairfields’ and ‘Queenswood’ located to the east and north of Hereford respectively.

The Crime Domain measures the risk of personal and material victimisation and is made up of several indicators based on the recorded numbers of violent crimes, burglaries, thefts and criminal damage.

Figure 1:  Map showing the areas of Herefordshire that are amongst the most deprived in England according to the crime domain of the indices of deprivation 2019. 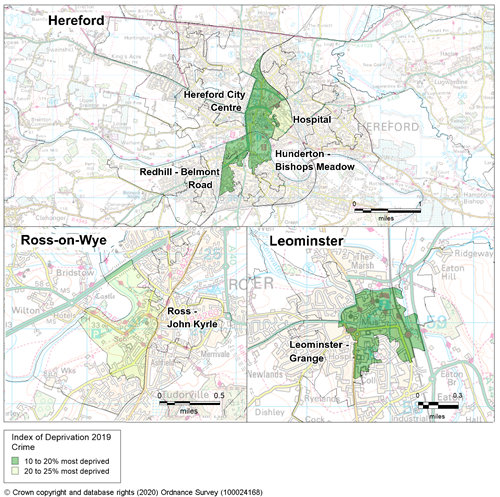 Please note that we are not responsible for the content or reliability of the linked websites. References or listings should not be taken as endorsement by Herefordshire Council of any kind. We cannot guarantee that these links will work all of the time and we have no control over the availability of linked pages.[1]Lower Super Output Areas (LSOAs) are fixed statistical geographies of about 1,500 people designed by the Office for National Statistics (ONS). For more information please see the useful definitions page.