Whether a household is in fuel poverty is determined by the interplay of three key factors:

National analysis of fuel poverty data indicates that households in fuel poverty are more likely to occupy large, older houses, and be owner-occupiers and families.[1] 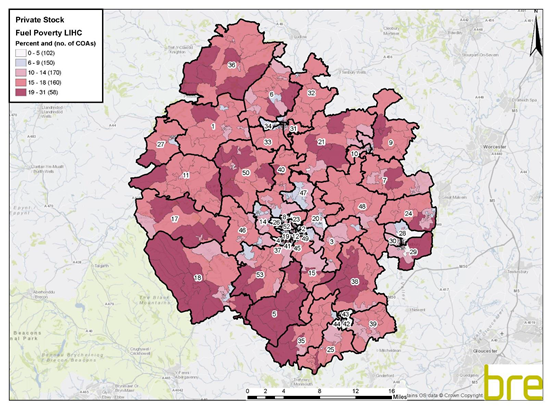 Being off the mains gas grid significantly increases the risk of a household being in fuel poverty, as the fuel options for off-grid homes are often more expensive and less energy efficient than gas.  Furthermore, rural households are also more likely to be living in older and less thermally efficient dwellings, and to have a lower than average household income.[3]

The Healthy Housing Survey (2011) identified that mains gas was available to only 69% of properties in Herefordshire, compared to 87% nationally.[4]

Fuel poverty adversely impacts upon health and well-being through associated financial hardship as well as increased risk of conditions such as respiratory illness, high blood pressure, and hypothermia.  In addition, the physiological effects of exposure to cold room temperatures are well documented and cold homes are known to contribute to excess winter deaths.[5]

[1]Cutting the cost of keeping warm: A fuel poverty strategy for England, Department of Energy and Climate Change, 2015.