Mental health is an issue of national and local concern.  In the UK one in four adults will experience a mental health problem each year [1] and 11% of children and young people aged between five and fifteen have a clinically diagnosable a mental health issue.[2]  Mental ill-health is the largest cause of disability in the UK.[3]

Mental health prevalence rising but remains lower than for England

Mirroring the national pattern the prevalence of patients in Herefordshire with schizophrenia, bipolar affective disorder and other psychoses has increased steadily. However, the local figure has remained lower than that for England and in 2017/18 was 0.83% compared to 0.94%. The prevalence of depression in Herefordshire has also risen, increasing by over two thirds since 2012/13 with a figure of 9.1% recorded in 2017/18, although the local rate is lower than that for England as a whole – Figure 1.

Prevalence of mental health disorders in children similar to England

Parental mental illness is one of most common reasons for children to need social services involvement.  Around 4,900 under 18s in Herefordshire are living with a parent with severe mental health issues.

In 2015 over 2,100 children and young people aged 5-16 were estimated to have a clinically diagnosed mental health disorder in Herefordshire equating to 8.9% of this age-group, a figure slightly lower than that reported nationally (9.2%). Data for a variety of mental health disorders in children indicate that observed prevalence figures for Herefordshire are similar to those reported across England as a whole.

During 2017/18 a total of 8,395 Herefordshire residents were known to be in contact with secondary mental health, learning disabilities and autism services which represents 4.4% of the population, a proportion similar to that for England as a whole (4.5%). Of this total 4.1% (345) spent time in hospital as part of being in contact with these services which represents which is the same proportion as that recorded for England.

Mental health problems are common among those needing treatment for alcohol misuse and alcohol misuse is common among those with a mental health problem. In 2017/18, the rate of admissions to hospital for mental and behavioural disorders due to alcohol in Herefordshire was 180 per 100,000 which is appreciably lower than the national figure of 371 per 100,000.

Suicide is a significant cause of death in young adults, and is seen as an indicator of underlying rates of mental ill-health. Suicide is a major issue for society and a leading cause of years of life lost.  Between 2003 and 2013 in the UK over 18,000 people with mental health problems took their own life.

There were 59 suicides registered in Herefordshire between 2015 and 2017. This corresponds to an overall age standardised suicide rate of 11.7 per 100,000 population, a figures similar to those recorded for England. While the 2015-17 local rate is the second highest recorded this century it is not significantly different for previous figures. 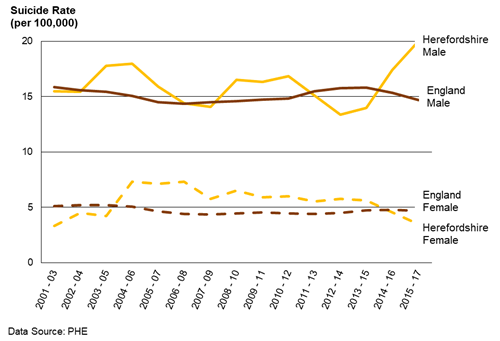 When looking at the all person age-specific rates of suicide in Herefordshire since 2000 the rates increase with age, being highest among 45- to 49-year-olds (14.5 deaths per 100,000).