The income deprivation affecting older people index is a supplementary index to the overall income domain, which is one of the domains that makes up the Index of Multiple Deprivation 2019 (IMD 2019). The score gives the proportion of adults aged 60 or over living in income deprived households.

There were approximately 6,100 older people living in income deprivation, 11% of all people aged 60 or over.

Twelve LSOAs [1] fall within the 25% most deprived in England. Of these, eight are in Hereford, three in Leominster and one in Bromyard. ‘Leominster – Ridgemoor’ and ‘Courtyard’ in Hereford have the greatest proportions of older people affected at 32% each; for the remaining ten deprived LSOAs the proportions ranged between 23 and 29%.

There are 11 LSOAs where there are 5% or less older people living in income deprived households. Of these ‘Old Eign Hill’, ‘St. Paul’s’ and ‘Bodenham Road’ are adjacent to each other in the north east of Hereford, while a further four are located in rural areas to the east of the city and around Ledbury and around Ross-on-Wye. The only LSOAs in the north of the county are at ‘Queenswood’ north of Hereford and ‘Luctonia’ to the north of Leominster.

Figure 1:  Maps showing the areas of Herefordshire that are among the most deprived in England according to the Income Deprivation Affecting Older People supplementary index. 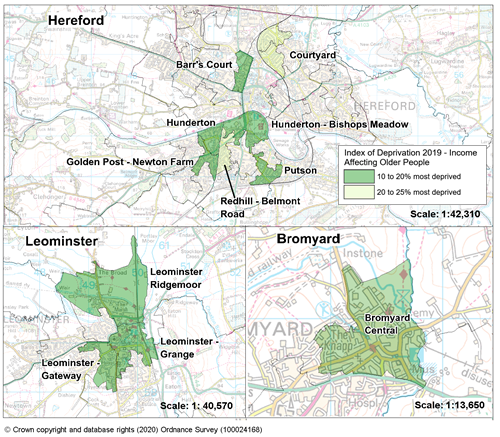