People who are homeless

Homelessness can be associated with severe poverty and is a social determinant of mental health.  It can also have a severe impact upon an individual’s physical health and homeless people are more likely to be victims of crime.[1]

The causes of homelessness are often complex so that preventing homelessness is a difficult issue to address.   However, it is known that some factors and experiences can make people more vulnerable to homelessness, including poor physical health, mental health problems, alcohol and drugs issues, bereavement, experience of care, and experience of the criminal justice system.[3]

There is a statutory duty for local authorities to provide advice and assistance to households who are homeless, or threatened with homelessness, and is some cases to provide suitable accommodation.  In certain circumstances they also have a duty to provide emergency accommodation.

The Homelessness Reduction Act 2017 made far-reaching changes to homelessness legislation and significantly amends the Housing Act 1996.  It came into force in April 2018.   Under the Act, local housing authorities will be required to intervene at earlier stages in order to prevent homelessness and to take reasonable steps to help those who become homeless to secure accommodation, or to maintain their existing accommodation. Its main purpose is to ensure that everyone who approaches a local authority because they are either facing homelessness or actually homeless should receive some assistance, whether they are in priority need or not, and irrespective of whether they may be considered intentionally homeless.

The Housing Solutions Team carries out prevention work which includes assisting applicants to find and secure their own accommodation. The chart below shows the large number of cases in which homelessness prevention was successful.

In Herefordshire the number of homelessness applications has declined in recent years.  In 2015/16 there were 114 applications, representing a rate of 1.4 per 1,000 households, well below the rate for England of 5 per 1,000. 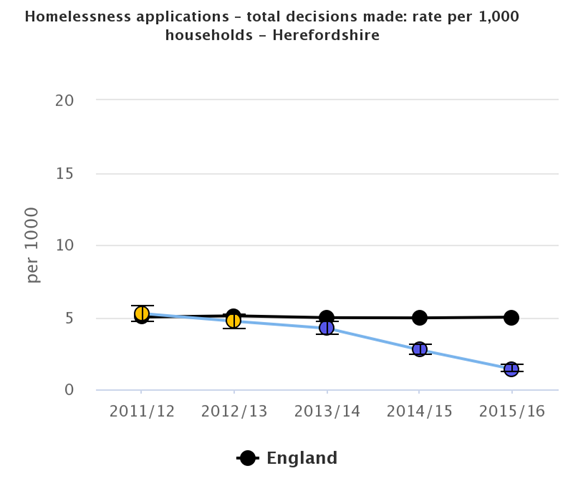 Although numbers are difficult to establish with certainty, the number of rough sleepers in Herefordshire was estimated at 11 in 2017, down from 21 the previous year.  The Hereford Winter Shelter was open between December 2016 and March 2017.  In this period a total of 66 (59 men and 7 women) individuals stayed for a total of 861 nights.  The approximate average stay per person was 13 nights.  This compares to a total of 79 individuals staying for a total of 1,124 nights in 2015-16, which was an approximate average stay per person of 14.2 nights.

The Herefordshire Homelessness Prevention Strategy 2016-2020 sets out a series of actions aimed at reducing homelessness and rough sleeping in the county.

The Homeless Health Needs Audit is a tool developed nationally that aims to i) increase the evidence available about the health needs of people who are homeless and the wider determinants of their health, ii) bring statutory and voluntary services together to develop responses to local priorities and address gaps in services, iii) give people experiencing homelessness a stronger voice in local commissioning processes, and iv) help commissioners understand the effectiveness of their services.

The audit was undertaken in Herefordshire between December 2016 and February 2018 and was used to capture the health needs data of people who were/are sleeping rough, sofa surfing, otherwise chaotically housed or living in specialist supported accommodation.  Auditing was undertaken through face-to-face interviews by Home Group, Supported Housing for Young People Project (SHYPP) and Herefordshire Council’s Outreach Service (HCOS).

Backgrounds in institutions, including prison, local authority care and mental health admissions were common.  The majority of respondents identified the cause of their most recent homelessness to be related to the loss of their individual personal support networks.

The audit concluded that health inequalities faced by people who are homeless are considerable and the loss of decades of life, compared to average life expectancy, is stark. Whilst prevention of homelessness and insecure accommodation, and the risk factors that lead to it are paramount in reducing such inequalities, so is meeting the needs of population who are homeless. This audit has identified considerable need for physical and particularly mental health support. It has shown high use of acute, emergency and secondary care, often driven by mental health problems.

[2]  Homelessness Kills: An analysis of the mortality of homeless people in early twenty-first century England, University of Sheffield and CRISIS, 2012