The income deprivation affecting children index gives the actual proportion of children aged 0-15 living in income deprived families. It is a supplementary index to the overall income domain, which is one of the domains that makes up the Index of Multiple Deprivation 2019 (IMD 2019).

There are around 3,900 children living in income deprivation across Herefordshire, representing 12% of the population aged under 16 compared to 14% according to ID 2015.

Although the number of LSOAs within the most deprived 25% across England increased between 2015 and 2019, with the exception of two the proportion of children living in deprived households fell; in ‘Ross – John Kyrle’ the proportion increased from 23% to 28% while the figure for ‘Leominster - Meadows Rugg’ remained the same.

At the other end of the scale, of the 11 LSOAs with less than 5% of children living in income deprived households four are within north west Hereford with others in Ross-on-Wye and in rural areas, particularly in the east of the county.

Figure 1:  Maps showing the areas of Herefordshire that are amongst the most deprived in England according to the Income Deprivation Affecting Children supplementary index. 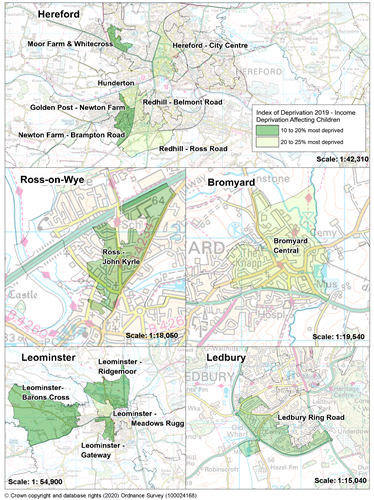