Adults (35+ years) residing in the most deprived areas are a third more likely to be admitted to hospital as a consequence of their smoking than the population of Herefordshire overall, and smoking related mortality rates are over 40% higher among the most deprived population quartile than in the County overall.

Health deprivation and disability is one of the domains that makes up the Index of Multiple Deprivation 2019 (IMD 2019).

Nine Herefordshire LSOAs [1] are among the 25% most deprived in England in terms of Health and Disability, four less than in 2015.

The largest concentration of health deprivation is in south Hereford, plus pockets in north of the city and in Leominster.

No LSOAs are in the 10% most health deprived across in England.

Since 2010 ‘Belmont-Whitefriars’ in south Hereford and ‘Upper Bosbury’ north of Ledbury have shown steady increase in relative health deprivation.

There are 35 LSOAs that are among the 25% least deprived in England. Most of these are scattered around the rural parts of the county.

The health deprivation and disability domain of the ID 2019 is made up of the following indicators:

Figure 1:  Maps showing the areas of Herefordshire that are amongst the most deprived in England according to the health and disability domain of the Indices of Deprivation 2019. 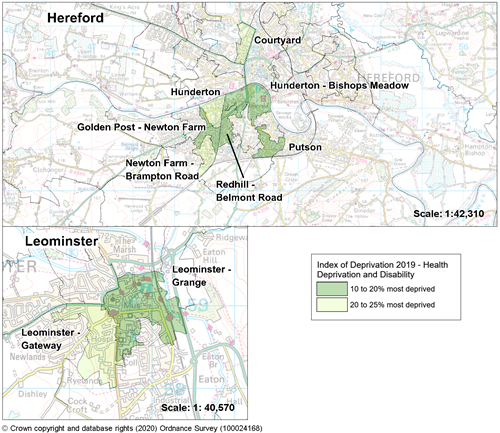