No Herefordshire LSOAs [1] are amongst the 25% most deprived in England in terms of wider barriers to housing compared a figure of 19 recorded in 2015. Indeed, only eight LSOAs were within the 50% most deprived a cross England, six in Hereford and two in Leominster.

Although these patterns may indicate improvements across Herefordshire, it is not possible to rule out that it is a result of the worsening of conditions in other parts of the country.

The Barriers to Housing sub-domain measures issues relating to access to housing such as affordability and is made up of the following indicators:

Figure 1:  Maps showing the 10% most deprived areas of Herefordshire according to the Barriers to Housing sub-domain of the IMD 2019. 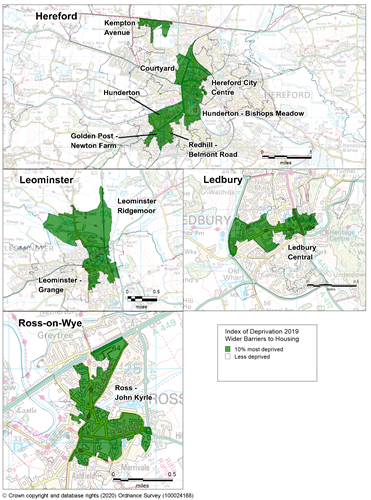