Employment deprivation is one of the domains that make up the Index of Multiple Deprivation 2019 (IMD 2019).

The total number of people experiencing employment deprivation  in Herefordshire is around 8,200 (8% of the population aged 18 to 59 for females and 18 to 64 for males), three out of five of which live in urban areas of the county.

Twelve LSOAs[1] in the county are amongst the 25% most deprived in England for employment which include the 11 that are most deprived according to overall deprivation with the addition of ‘Kington’ Central. Half of the LSOAs are in Hereford, five of which are south of the river, three in Leominster, and one each in Ross-on-Wye, Bromyard and Kington. Of these, ten are urban areas with only ‘Bromyard’ and ‘Kington’ classified as rural town and fringe’.

Two LSOAs, ‘Golden Post – Newton Farm’ in Hereford and ‘Leominster Grange’, are within the 10% most deprived across England with 23% and 21% respectively of working age residents that are employment deprived.

There are 27 LSOAs in the least 25% employment deprived across England all of which have 5% or less working aged residents affected. Of these five are urban LSOAs with the remaining 22 being in rural areas.

The Employment Deprivation Domain measures the proportion of the working-age population in an area that are involuntarily excluded from the labour market. This includes people who would like to work but are unable to do so due to unemployment, sickness or disability, or caring responsibilities.

Figure 1:  Maps showing the areas of Herefordshire that are amongst the most deprived nationally according to the employment domain of the Indices of Deprivation 2019. 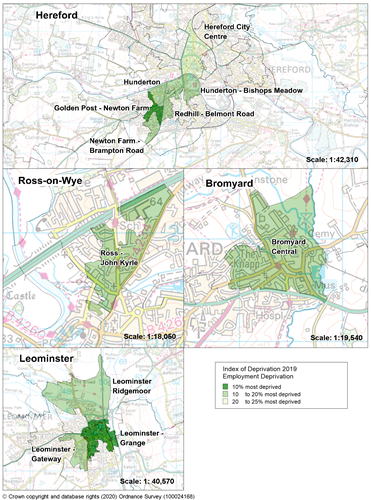