Note: The English Indices of Deprivation 2019 were released at the end of September, replacing those from 2015.  We will shortly be updating this page with the new data, but in the meantime, the Herefordshire data are available for download in the Domain scores for Herefordshire 2019.The Indoor Living Environment is a sub-domain of the Living Environment domain, which is one of the domains that makes up the Index of Multiple Deprivation 2015 (IMD 2015).

The indoor living environment, as defined by condition of housing and the availability of central heating, is Herefordshire’s biggest type of deprivation - almost two-thirds of LSOAs are in the 25% most deprived in England - more than any other domain.[1]

The majority (53 out of the 74) are in rural areas. The remainder are located in Hereford city, Leominster and Ross-on-wye.

The indoor living environment domain had the largest increase in relative deprivation, with a third more areas falling into the 25% most deprived in England than in 2010.

The ‘indoors’ living environment measures the quality of housing and is made up of the following indicators:

Figure 1:  Map showing the areas of Herefordshire that are amongst the most deprived nationally according to the indoor living environment sub-domain of the IMD 2015. 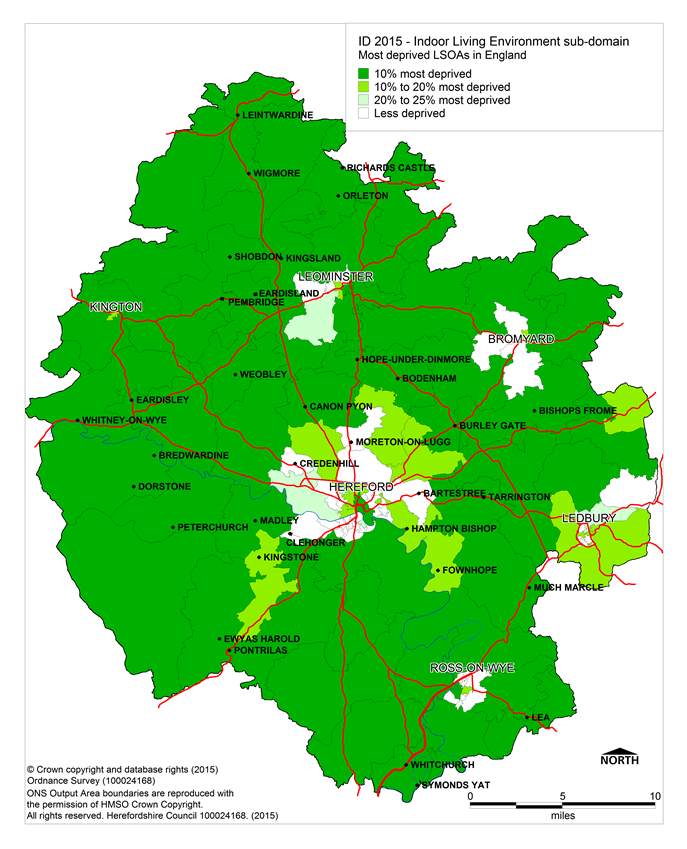