Adult Skills is a sub-domain of the Education and Skills domain, which is one of the domains that makes up the Index of Multiple Deprivation 2019 (IMD 2019).

Sixteen Herefordshire LSOAs [1] are amongst the 25% most deprived in England in terms of adult skills.

Of these five are within the 10% most deprived nationally - four in south Hereford and one in Leominster.

A further five LSOAs are within the 20% most deprived across the country of which three are in south Hereford and one each in Leominster and Ross-on-Wye.

All but the two of these deprived LSOAs are urban in character, the exceptions being those in the vicinity of Bromyard.

Adult skills – which includes qualification levels and ability to speak English - is the second biggest issue for the county across the people-related domains (i.e. excluding barriers to housing and services and living environment) next to children and young people’s education and skills.

There are 15 LSOAs that are amongst the 25% least deprived in England. Ten of these are rural in character, six of which are located in the east of the county between Hereford and the Worcestershire border, while two are located north of Leominster and one each north of Ross-on-Wye and in the Golden Valley. The five urban LSOAs within the least 25% deprived areas nationally are all in north Hereford.

This domain measures the lack of attainment and skills in the local population relating to adults and is made up of the following indicators:

Figure 1:  Maps showing the areas of Herefordshire that are amongst the most deprived in England according to the Adult Skills sub-domain of the IMD 2019. 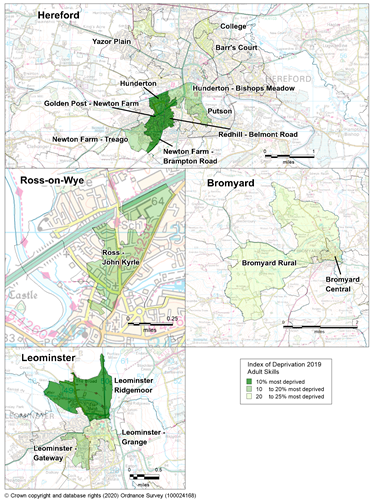