Employment by sector and industry

The information in this section comes from the Business Register and Employment Survey (BRES) 2017 [1], which is the official source of employee and employment estimates by detailed geography and industry. The survey collects employment information from UK businesses across each site that they operate. Due to the survey’s large sample size (approximately 85,000 businesses), BRES is able to produce good quality estimates for detailed breakdowns by industry and geography. The employment data in BRES represents the number of employees added to the number of working owners (for example, sole proprietors and partners). However, BRES does not cover very small businesses that are not VAT or Pay-As-You-Earn (PAYE) registered. These businesses account for only a small part of the overall economy, but it accounts for the difference between the BRES UK estimate of employment and the estimate from the ONS (Office for National Statistics) workforce jobs series. For total employment figures, other ONS sources such as workforce jobs (regional) and the Annual Population Survey (sub-regional) can provide fuller coverage of total employment, albeit with a less detailed industrial breakdown.

Note: The figures include businesses registered for PAYE but not for VAT, so are not continuous with BRES datasets for years prior to 2015. Also please noted that the current figures include farm agriculture which was excluded in previous years. The revised figures for 2016 and 2015 are included in this update.

Figure 1: Proportion of employees by industry in 2017 across Herefordshire, West Midlands and England. 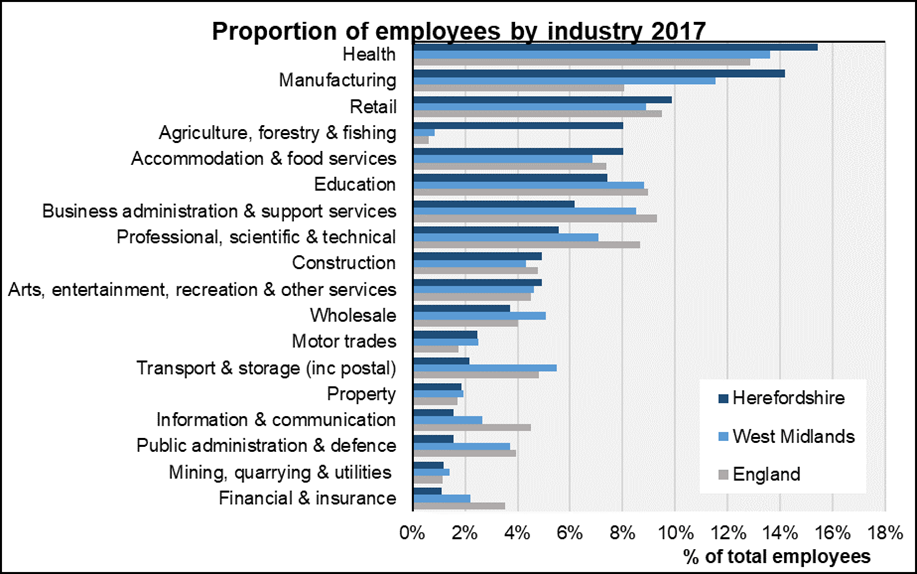 Job density is the number of jobs in an area relative to the size of the working age population [2] and is a measure of availability of employment for residents of an area. The total number of jobs is a workplace measure derived from a number of sources: 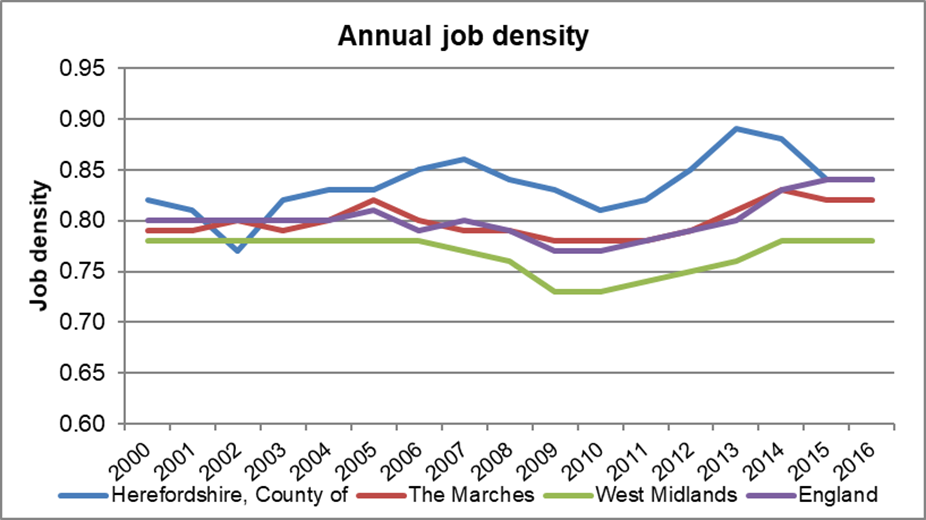 The Office for National Statistics also produce estimates of public sector and private sector employment based on results from BRES.  Unlike the other statistics presented here the public and private sectors in this dataset are defined on the basis of the legal status [3] of the employer rather than their Standard Industrial Classification (SIC).

According to this measure, 11,000 (14%) of all employees are employed in the public sector in Herefordshire compared to 16% across England.  However if the public sector is defined on the basis of SIC codes, including ‘public administration and defence; compulsory social security’, ‘education’ and ‘human health and social work’ then it accounts for a much greater proportion – 24% in Herefordshire (26% across England).  Neither definition properly captures the size of the public sector.  Using the legal definition excludes some public services that are commissioned in the private sector, whereas defining by industrial classification includes some services such as social care that are funded by the private sector.

[4] In this case the public sector is self-defined by the respondent.  Respondents tend to over report employment in the public sector, but this over-reporting is likely to be of similar magnitude between different areas.