In England, local authorities are responsible for co-funding care services for individuals who have social care needs and insufficient financial means to meet the cost themselves. The rising demand and increasing cost of providing adult social care at a time of prolonged fiscal austerity presents a major challenge for public services across the country.

In 2015/16, local authorities spent £16.8 billion (2017/18 prices) on adult social care, with ring fencing of budgets resulting in spending on adult social care increasing from 34% to 39% of total service spending between 2009/10 and 2015/16.[1]  Nevertheless, between 2009/10 and 2016/17 spending fell by 8% in real terms. According to the Local Government Association (LGA), ‘the consequences of underfunding include an ever more fragile provider market, growing unmet need, further strain on informal carers, less investment in prevention, continued pressure on an already overstretched care workforce, and a decreased ability of social care to help mitigate demand pressures on the NHS.[2]

Herefordshire Council’s approach is to focus services upon those in greatest need, recognise personal abilities, fully utilise community assets and networks and preventative strategies to enable people to live independently for as long as possible. Herefordshire’s Adults and Wellbeing Plan 2017 to 2020 sets out a ‘whole system outcomes’ model which draws on the strengths of individuals and the wider community to provide holistic support for clients.[3]

In order to meet expected demand for social care in England an estimated 350,000 to 700,000 new workers will be needed between 2016 and 2030, representing growth of between 21% and 44%.  However, staff recruitment and retention in what has traditionally perceived as a low-wage, low-skill sector has been challenging.  This was illustrated in a report by Skills for Care in 2017, which estimated that around a third of the workforce were new starters in caring jobs during the previous year (either completely new to, or moving within, the industry).[4] There is also concern nationally about the potential impact of Britain leaving the European Union on staffing in the social care sector; seven per cent of the 1.3 million UK care workers are from other European countries, and there has been a fall in the number of EU nationals taking jobs in the sector since the referendum in 2017. 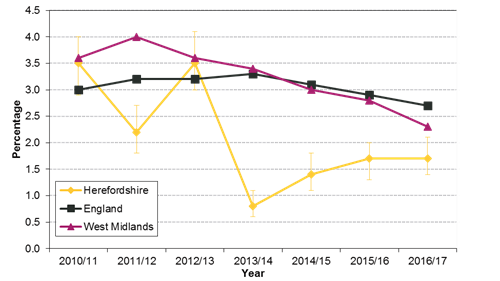 DTOCs are detrimental to the health and wellbeing of older people, disrupt the flow of incoming patients, and are costly.  Herefordshire’s delayed transfers of care rates have been lower than those for the West Midlands region and England.  Locally, the majority of delayed transfers of care are caused by patients awaiting a nursing home placement or availability (25%), awaiting a care package in their home (24%), and awaiting completion of an assessment (17%).

Given Herefordshire’s relative levels of wealth and ageing demographic, it is likely that there are a considerable number of people who are self-funding their personal care needs. There is only limited support available to self funders to help them make appropriate care choices, but if they exhaust their own resources they are likely to need local authority funded care. Although the council provides advice regarding care choices to all who want it, not all choose to seek such advice and it is currently difficult to establish the size of this cohort, or what proportion of self funders eventually go on to need local authority funded care. Increasing the availability of data in this area has been highlighted as a priority for Adults’ Social Care commissioning.

[4] The state of the adult social care sector and workforce in England, Skills for Care, 2017.