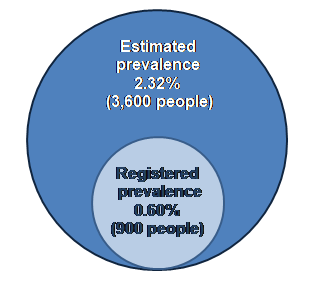 The number has increased by 10% since 2009/10 (around 80 people), notably less than nationally (20%) and regionally (18%). There is not expected to be any notable change in the total number of registered adults with an LD by 2035, but those who are will have a much older age profile than currently – and likely more complex needs related to their age.

Modelled estimates suggest that GP registers reflect less than a quarter of all adults with LD, and that the true number in Herefordshire is likely to be around 3,600 people (2.3% of the adult population). This is predicted to increase by around 300 (8%) by 2035 – although again, disproportionately in the number aged 65+.

Herefordshire Council currently provides long-term social care support to around 600 adults because of a learning disability – 9% more than in 2009/10.

They are mainly aged 18 to 64. There are 36 establishments across Herefordshire providing residential accommodation for adults with LD. Currently, around 150 people with LD are provided with day opportunities at seven locations across the county.

Although having a learning ‘difficulty’ does not always imply a learning ‘disability’, the likelihood is that for the majority of individuals this will be the case. In Herefordshire, in 2017, 25 per 1,000 pupils in state funded primary, secondary and special schools were known to have moderate learning difficulties; significantly lower than the proportion nationally (30 per 1,000) and regionally (45 per 1,000). As there is no evidence to indicate that actual prevalence is any lower in Herefordshire than elsewhere, this suggests that identification is not as effective. Conversely however, the proportion of children identified as having severe learning difficulties was significantly higher in Herefordshire than nationally or regionally.   The proportion of children with learning disabilities known to schools (33 per 1,000) is similar to nationally (35 per 1,000), but significantly lower than regionally (50 per 1,000).