Dementia is an umbrella term for a progressive neurological disorder that affects how the brain functions. There are over 200 different types of dementia, with Alzheimer’s disease being the most common, accounting for almost two-thirds of all dementia cases.[1] Symptoms vary depending upon the part of the brain affected, and can include difficulties with memory, communication, decision making, planning, and orientation to place and time, all of which impact upon a person’s ability to carry out activities of daily living.

In the early stages, when dementia is mild, most people are able to carry out their usual activities either independently or with a low level of support. However, as the condition progresses, some people living with dementia require more intensive support and may move into a residential or nursing home to have their needs met.

Dementia prevalence increases with age and is more common among women. People with learning disabilities are at increased risk of developing dementia. Research on behalf of the Alzheimer’s Society estimated in 2014 that around 7% of older people in the United Kingdom have some form of dementia. According to the Institute of Public Care, in 2017 there were around 702,000 older people in England with dementia.

Figure 1: Estimated proportion of people aged 65 and over with mild, moderate and severe dementia in Herefordshire in 2017 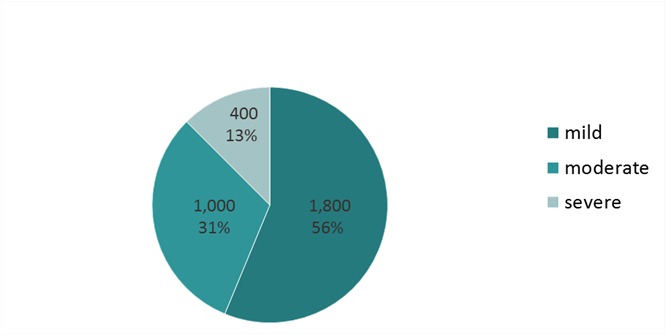 Dementia-related costs among older people in Herefordshire were estimated to be in the region of £104 million, with the highest proportion (44%) attributed to the provision of informal care.

Dementia presents a significant and urgent challenge to health and social care in Herefordshire in terms of the numbers of people affected, the impact it has on their quality of life, and the associated costs of living with the condition.  The condition also presents particular challenges for end of life care.  It is one of the medical conditions that contributes significantly to the burden of ill health suffered by older people. In recognition of this, Herefordshire’s Health and Wellbeing Board has made supporting people living with dementia a strategic priority.