Recognition by healthcare professionals of when a person is nearing the end of their life and then responding appropriately plays an essential role in determining whether or not that person has a ‘good death’.  This means the person:

Making this possible requires not only excellent clinical decision-making, but timely care decisions in consultation with the individual and the family.

Evidence suggests most people would prefer to die at home, however currently almost half die in hospital.[2]  Ensuring a person is able to die in a place of their choosing often involves multiple agencies working closely together to co-ordinate the support they provide. These agencies can include general practitioners, community nurses, domiciliary and adult social care services, hospital and ambulance services, pharmacies, specialist and allied health professionals, hospices and other voluntary sector organisations.  However, research suggests end of life care is inconsistent across the country and a range of indicators.[3]

Dementia presents particular challenges for end of life care because people with dementia may present with signs that suggest they are very close to death, but in fact can show these signs for many months or even years.[4]

For people aged over 65 and diagnosed with dementia, in Herefordshire in 2015 75.9% of deaths occurred in the deceased’s usual place of residence, significantly higher than the percentage in England (68.6%) and in the West Midlands region (64.7%).  In 2015, a significantly lower percentage of people aged 65 and over and diagnosed with dementia died in hospital in Herefordshire than in England or the West Midlands region (22.3% compared to 30.4% and 34.9% respectively).

Figure 1:  Deaths in usual place of residence as a percentage of deaths of people aged 65 and over with a recorded mention of dementia: 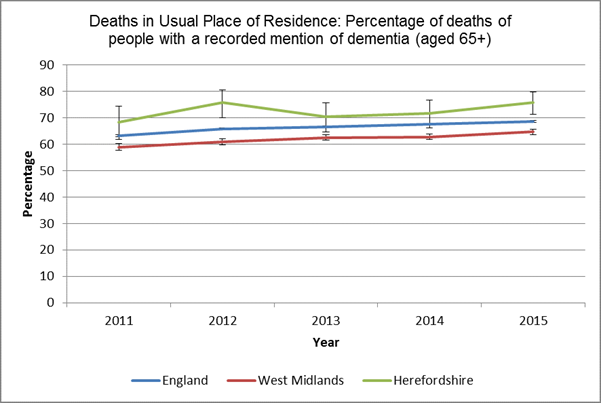 [1] End of Life Care Strategy: Promoting high quality care for all adults at the end of life, Department of Health, 2008, p.9.

[3] Atlas of Variation in End of Life Care for England – largest of its kind in the world, N. Bowtell, A. Pring and J. Verne, National End of Life Care Intelligence Network, Public Health England, 2017.

[4] End of life care in dementia: An introduction, Social Care Institute for Excellence.