Motor vehicle traffic accidents are a major cause of preventable deaths and morbidity nationally, particularly in younger age groups. For children and for men aged 20-64 years, mortality rates for motor vehicle traffic accidents are higher in lower socio-economic groups.  The vast majority of road traffic collisions are preventable and can be avoided through improved education, awareness, road infrastructure, and vehicle safety.

Herefordshire has the second highest road length per population in England, with a low population for the size of the county.  This has an impact on the rate of accidents, which is conventionally reported per person living in the county.

In 2017/18, 89 people were killed or seriously injured on Herefordshire’s roads, a number that has not changed significantly since 2016, and is one of the lowest in the West Midlands region.  However, for meaningful comparison with other areas, and to identify trends, numbers are pooled over a three-year period and expressed as a rate per 100,000 population.  The latest period for which this rate is available is 2014 to 2016.

281 people were killed or seriously injured (KSI) on Herefordshire roads in the period 2014 to 2016, which corresponded to a rate of 49.8 per hundred thousand residents, similar to the rate seen in neighbouring rural Shropshire (49.2) but higher than the West Midlands region as a whole (37.1).  Although there has been no statistically significant change in the local rate since 2009/11, an apparent rise means that it is now significantly higher than the England figure of 39.7 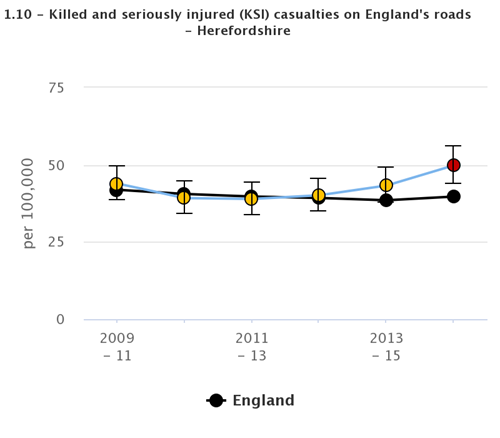