Globally, close to 800,000 people die due to suicide every year, which is one person every 40 seconds.[1] Many more people entertain suicidal ideations at some point in their lives.  Each suicide is an individual tragedy that often creates great sadness and soul-searching for the family and friends and community of the person who has died.

Suicidal behaviours are complex: social, psychological, and cultural factors can all interact to lead a person to suicidal thoughts or behaviour. For many people, an attempt may occur after a long period of suicidal thoughts or feelings, while in other cases, it may be more impulsive.[2] While not everyone who takes their own life, or experiences suicidal ideations is mentally ill, suicide is often associated with some form of mental health crisis.

Numbers of suicides in Herefordshire: 2021 registrations

The Office for National Statistics report that suicides did not increase during the coronavirus pandemic.

The ONS concludes that “the latest available evidence shows that suicide rates did not increase because of the coronavirus pandemic, which is contrary to some speculation at the time”.  Nationally, the number of suicides registered in 2021 increased significantly compared to 2020, but this was due to delays in coroners’ inquests caused by the pandemic.  It was in line with rates in 2018 and 2019.  Deaths by suicide cannot be registered until an inquest is completed, which means there is a delay of several months between the date the death occurred and when it was registered – around half of the deaths registered in 2021 will have occurred in 2020.

Suicide is a significant cause of death in younger adults and is seen as an indicator of underlying rates of mental ill-health. Suicide is a major issue for society and a leading cause of years of life lost.

Numbers of suicides in Herefordshire: 2021 registrations

In September 2022, the Office for National Statistics published their latest analysis of deaths from suicide in England and Wales, registered in 2021.  Herefordshire didn’t see this increase: 16 deaths by suicide were registered in 2021, slightly fewer than the 27 registered in 2020 and 21 in 2019, and the same number as in 2017 and 2018.  The pandemic doesn’t seem to have had a significant impact on suicide inquests locally – with an average of 130 to 140 days delay in registration most years since 2015.

The overall suicide rate for Herefordshire has shown no significant trend over the last 20 years and is not statistically different to England’s or the West Midlands’.

Numbers would be expected to fluctuate year-on-year, so a more robust indicator of trends and for comparison is the rate over a three-year rolling average period.  Confidence intervals help to show the level of natural variation that might be expected in small numbers.  The suicide rate for Herefordshire has shown no significant trend over the last 20 years.  For most years, it has been slightly higher than the national and regional rates, but the overlapping confidence intervals (grey bars in chart below) indicate that this difference is not statistically significant.

The majority of suicides are amongst males: around three-quarters of all deaths from suicide in Herefordshire in the last 20 years.

Suicide rates in general are much higher amongst males than females (see chart below).  A local breakdown by age and gender for 2019-21 has yet to be published, but in 2018-20 the age-standardised rate was 19.3 per 100,000 males, compared to 5.7 per 100,000 females.  Around three-quarters of suicides in Herefordshire are males.

The rate amongst Herefordshire males has been slightly higher since 2014-16 than previously, but not significantly so – i.e. within the range that could be expected through natural variation from year to year.  It was significantly above the national rate in 2015-17. 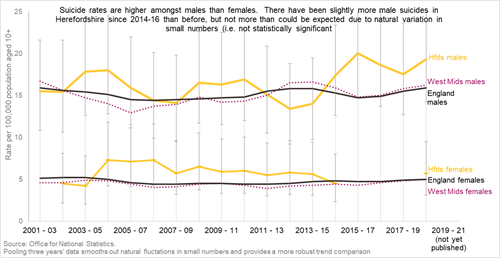 Nationally, the highest suicide rates are seen amongst those aged 45 to 54.  There has been an increase in rates amongst females under 45 since 2015

Looking at trends over time in broad age groups for England and Wales as a whole, men aged 45 to 64 years have had the highest age-specific suicide rates since 2010.  Between 1994 and 2009 the highest rate was amongst men aged 25 to 44.  For women, rates are also highest amongst those aged 45 to 64, as they have been since 2005.  They have remained constant however, whilst in recent years rates among females under 45 have increased between 2015 and 2021.

The Support After Suicide Partnership provides information and details of organisations that can offer support to people bereaved by suicide.