The most detailed counts of business come from the 'UK business counts' data set, which is based on an extract compiled from the Inter Departmental Business Register (IDBR).  Businesses are either counted at an enterprise or local unit level:

According to published data:

Figure 1: Proportion of businesses (enterprises) in Herefordshire by employment size band and industry 2018 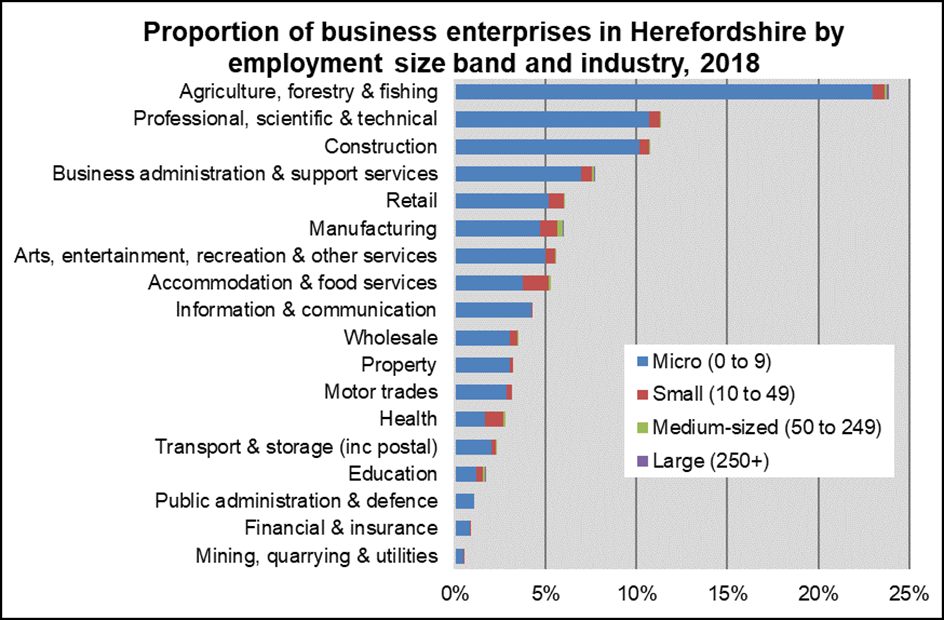 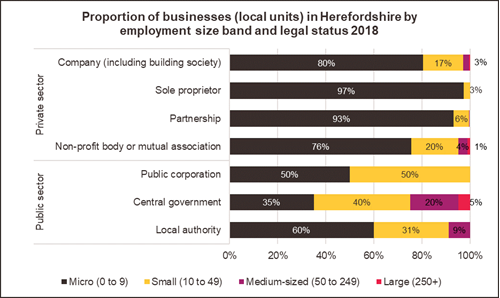 Business demography – Birth, Death and survival of businesses in Herefordshire

The information of formation (birth) and closure (death) of businesses, as well as the survival rate is important to get a clear picture about the changing business environment in the local economy. The following statistics are based on the registration of businesses on the VAT (Value Added Tax) and PAYE (Pay As You Earn) tax schemes.

Business Birth and Death rates (respectively, the percentage of registrations and de-registrations compared to the number of active enterprises indicates the degree of business churn (turnover of businesses) in an area. Higher business churn up to a certain limit can be favourable for economic growth, as more productive innovative businesses tend to displace less efficient ones.

Figure 3: Rate of births and deaths as a proportion of active businesses since 2008.

Survival rates of businesses are seen as an important indicator of the quality of new firms starting up in an area and of the strength of the business environment itself. Business survival data include the date of businesses registrations and provide the percentage of businesses surviving after a certain number of years. These data suggest that businesses locally and nationally are at most risk of closure when they are between 2 and 3 years old. This is especially the case for independent businesses.

High growth enterprises in Herefordshire accounts for 0.3% of total businesses, broadly similar to the national (0.4%) and regional level (0.3%). High-growth businesses drive economic growth in the UK and predicting if a business has the potential to show high growth – or alternatively low performance – could be used to target where and how much people invest, where people choose to work and what support structures and policies are developed and put in place. [2]

[1] The rate is the proportion trading after one year.