The body of evidence confirming that the earth is warming as a result of human activity, most notably from the burning of fossil fuels, is now overwhelming.  Average global temperatures are already at least 1 degree Celcius higher than pre-industrial levels and will inevitably increase further.  An increase of more than 2 degrees C will have a catastrophic impact on ecosystems across the world and represents an existential threat to society.  The World Health Organisation (WHO) has described climate change as “the single biggest health threat facing humanity”.[1]

In response to the climate crisis, Herefordshire Council declared a Climate and Ecological Emergency in March 2019 and committed to an accelerated reduction of its own carbon emissions with the aspiration to become carbon neutral by 2030/31.  It also committed to working with strategic partners, residents and local organisations to develop a revised countywide carbon dioxide reduction strategy aspiring for carbon neutrality by 2030.  As the chart below illustrates, achieving this ambitious target will require a steep descent from current levels of greenhouse gas emissions. 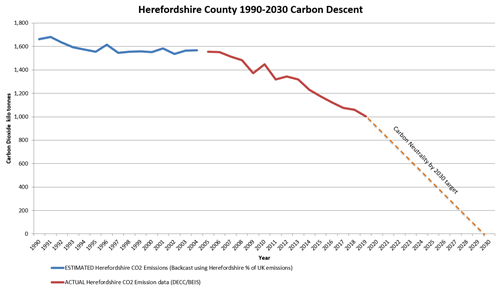 Herefordshire faces some particular challenges that impact upon the emission of greenhouse gases, including:

Having said this, the county’s CO2 emissions per square kilometre are significantly lower than the UK average.[2]

The Midlands Engine Intelligence Hub's CO2 dashboard provides at a glance information on the level and sources of CO2 emissions in Herefordshire and across the Midlands region.

Nationally, in October 2021[3] three-quarters (75%) of adults in Great Britain said they were worried about the impact of climate change, while just over two-fifths (43%) said they were feeling anxious about the future of the environment more widely.  Those worried about the impact of climate change were three times more likely to have made a lot of changes to their lifestyle in response to the issue than those who were relatively unworried.

Little is currently known about attitudes towards climate change in Herefordshire, although 30% of children and young people surveyed in 2021 said they were worried about the environment and climate change.

[2] Carbon dioxide emissions and woodland coverage where you live.  Office for National Statistics.