Cancer is when abnormal cells divide in an uncontrolled way and some cancers may eventually spread into other tissues.  There are over 200 different types of cancer, each with its own methods of diagnosis and treatment. There is no single cause for any one type of cancer although some of the known causes include alcohol, asbestos, diet, being overweight, natural and man made radiation, smoking, ultraviolet light (including sun exposure and use of sun beds) and viruses such as human papilloma virus (HPV).

Between 2009/10 and 2017/18 the prevalence across the Herefordshire showed a consistent year on year increase mirroring the pattern for England as a whole. However, throughout this period the local rate has been consistently higher than the national figure and in 2017/18 was 3.5% compared to 2.7% for England (Figure 1). 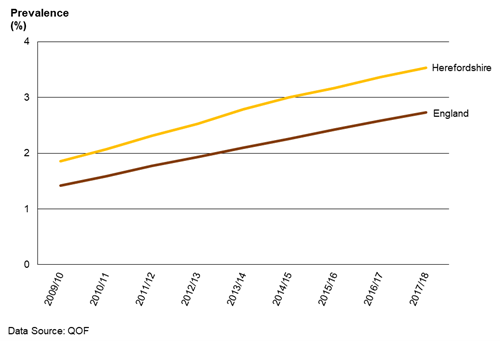 Local incidence lower than for England 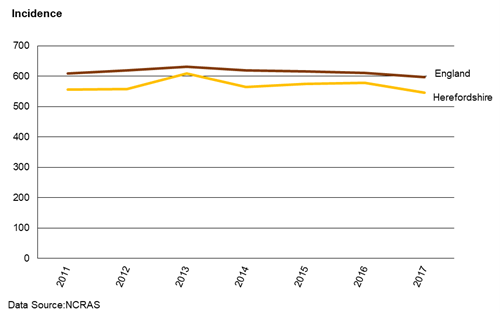 Cancer is one of the most common causes of premature mortality (occurring at less than 75 years of age) in England and between 2008 and 2017 was responsible for 43% of premature deaths in Herefordshire. In the ten years prior to 2017 the Herefordshire premature mortality rate has been lower than that recorded nationally, although in 2015-17 the local figure of 126 per 100,000 was not statistically different from that for England (135 per 100,000). 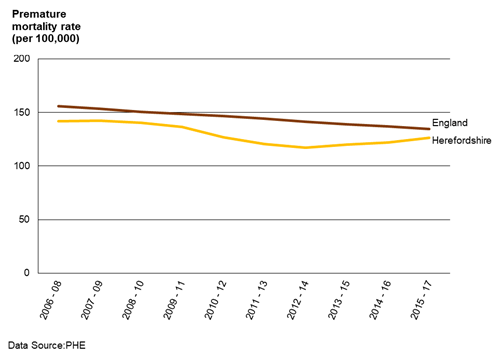