Little known about current levels of alcohol consumption amongst adults in Herefordshire, although it was previously similar to the national picture. Indications are that nationally overall levels of consumption increased during Covid lockdowns.

Following the national trend, alcohol-specific hospital admissions continue to rise, with 900 seen in 2019/20 with more men than women being admitted.

Nationally, people from the most deprived areas remain twice as likely be admitted to hospital and 50% more likely to die prematurely due to alcohol than those in the least deprived. 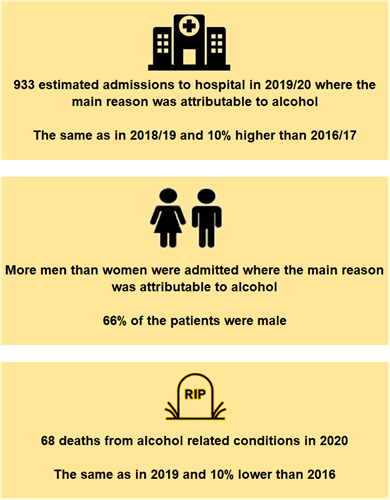 The proportion of Herefordshire adults who smoke remains lower than seen nationally ess common than nationally, and has fallen by a third in recent years (to 2019/20).

Smoking-related mortality has also fallen and is lower than nationally, although hospital admissions have remained stable.

However, there are still almost 20,000 smokers across the county, with those in the most deprived areas twice as likely to smoke and to die from smoking related conditions than those in the least deprived.

A significantly higher proportion of mothers in Herefordshire are known to be smokers at time of delivery (14%) compared to England as a whole (10%).

Although the number of smokers in Herefordshire setting a quit date has fall in recent years, in 2019/20 the figure (365) more than doubled compared to the previous year but remains lower than that reported nationally. 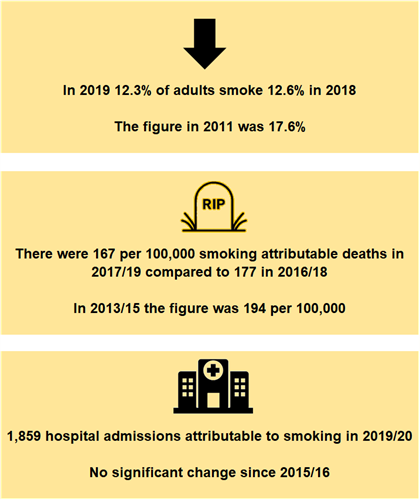 Opiate and crack cocaine use lower than nationally

In 2016/17 there were an estimated 719 opiate and/or crack cocaine users in Herefordshire which corresponds to a prevalence of 6.3 per 1,000 population which is significantly lower than that for England as a whole (8.9 per 1,000).