The Marmot Review identified that ‘giving every child the best start in life is crucial to reducing health inequalities across the life course.  The foundations for virtually every aspect of human development – physical, intellectual and emotional – are laid in early childhood.’[1]

In 2016, 1.5% of all live births at term in Herefordshire had a low birth weight; a significantly lower proportion than nationally (2.8%) and regionally (3.2%).

Caesarean sections are often required for a number of maternal and infant reasons. By their very nature (i.e. they are used when there are complications) they are likely to be associated with an increased risk of problems.  In 2015/16, 29.6% of deliveries in Herefordshire were by caesarean section, a significantly higher proportion than nationally (26.3%) and regionally (27.1%).

The breastfeeding rate in Herefordshire has shown a continual increase since 2010/11 and compares very well with the national rate. In 2015/16 the proportion of mothers in Herefordshire who breastfed their babies for at least six to eight weeks after birth was 52.3%, a figure significantly higher than that reported for England (43.2%). The health and wellbeing benefits of exclusively breastfeeding infants from birth up to the age of six months are well known, and mothers who are unable to breastfeed for health or other reason are encouraged to provide a good milk supplement for their infants.

In 2015/16 local Dtap/IPV/Hib7 immunisation rates exceeded the herd immunity uptake target of 95% and were higher than national and regional figures. Similarly, the local uptake for Haemophilus Influenza type B/Meningitis (Hib/MenC) and Mumps, Measles and Rubella (MMR) first and second doses have increased since 2010/11 and in 2015/16 all exceeded the target of 95% for the first time and were higher than both the national and regional figures.

The Early Years Foundation Stage Profile (EYFSP) is a teacher’s assessment at the end of EYFS (the end of the academic year in which the child turns five).  It requires teachers to assess whether the child is emerging, expected, or exceeding against seventeen early learning goals.    The achievement gap is the difference between the median total points score for all children and the mean total score for the lowest 20% of achievers across all the Early Learning Goals.   Herefordshire is in the upper quartile of all local authorities, and the gap has been narrowing since 2013.

Figure 1.  Percentage gap in achievement across all Early Learning Goals 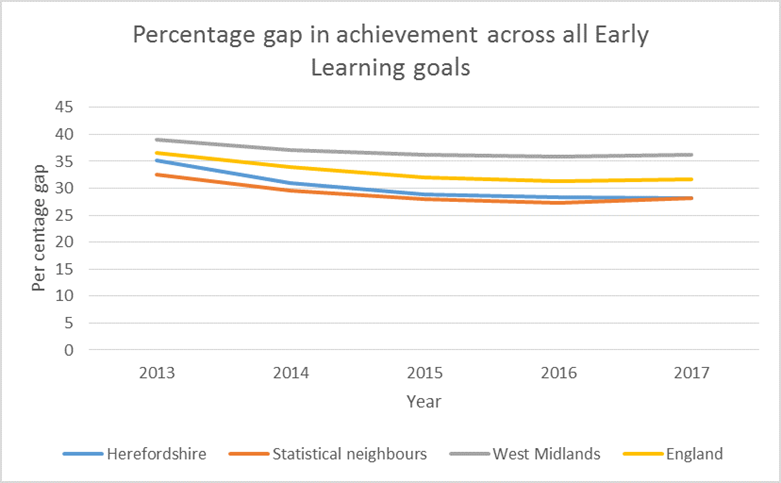