Frailty can be identified by the presence of three or more of the following: unintentional weight loss, reduced muscle strength, reduced gait speed, self-reported exhaustion, and low energy expenditure. People with one or two of the above symptoms are considered to have prefrailty.

The prevalence of frailty increases with age with 4% of those aged 65 to 69 estimated to be frail, rising to 26% among those aged 85 and over.

Figure 1:  Estimated percentage of the population aged 65 and over who had prefrailty and frailty in 2016: 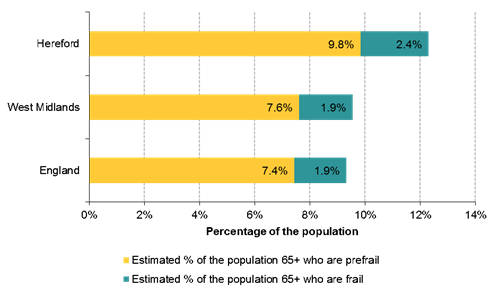 A fall is … “an event whereby an individual comes to rest on the ground or another lower level with or without loss of consciousness”.  Falling can have serious consequences, especially among older people. It can have a range of physical and psychological consequences, result in a fracture, admission to hospital, disability, and admission to residential or nursing home.

In 2017, over 12,000 older people in Herefordshire experienced a fall, with the number expected to rise by 19% by 2025 to around 14,500 and to over 18,100 by 2035. Falling can have serious consequences, especially among older people. It can result in a fracture, admission to hospital, disability, and admission to residential or nursing home.

Figure 2:  Estimated number of people aged 65 and over predicted to have a fall in Herefordshire 2017 to 2035: 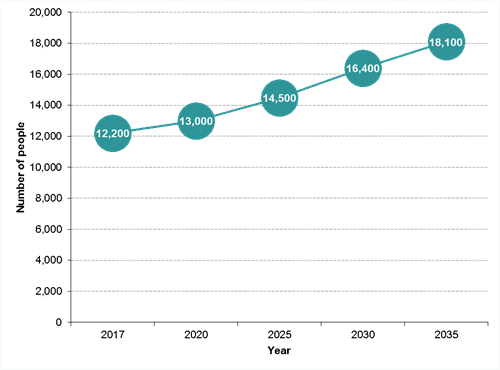 Osteoporosis is a condition where bone density is decreased, increasing the risk of a fragility fracture. Fragility fractures are relatively common, affecting one in three women and one in five men over the age of 50. They cost NHS approximately £1.9 billion per year and can lead to permanent disability.

Hip fractures are the most common serious injury among those aged 65 and over, with approximately 95 per cent caused by a fall. There were 64,864 hip fractures in the UK in 2015/16. Following a hip fracture patients may remain in hospital for a number of weeks, leading to one and a half million bed days being used each year, which equates with the continuous occupation of over 4,000 NHS beds(110). Only a minority of older people who have sustained a hip fracture will completely regain their previous abilities, with approximately 20% being admitted to long term care within a year of their fracture.

In Herefordshire, the age standardised hip fracture rates among people over the age of 65 have remained relatively constant between 2010/11 and 2015/16, and have been roughly in line with the rates for England and the West Midlands, apart from in 2011/12 and 2014/15 when they were significantly lower than the regional and national rates. 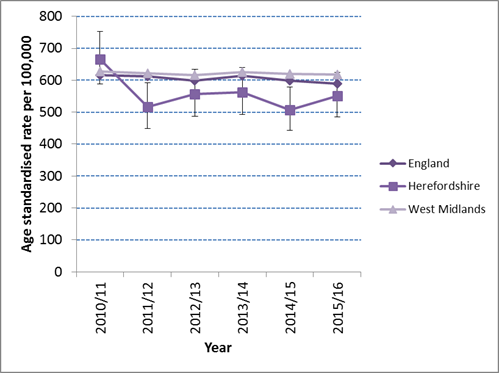