The most common causes of excess winter deaths are cerebrovascular diseases, ischaemic heart disease and respiratory disease, with the majority of excess winter deaths occurring among older people.  The statistical evidence shows that there is a continuous relationship between indoor temperature and vulnerability to cold-related death. The colder the dwelling, the greater the risk.[1]

Poorly insulated homes and lack of access to mains gas can contribute to fuel poverty; something that has been linked to excess winter deaths.  Herefordshire has a greater proportion of households living in fuel poverty than England as a whole. It also has a much higher proportion of detached and older (pre-1900) housing, which can be relatively poorly insulated and expensive to heat, than England as a whole.  In a 2019 report, BRE found the performance of Herefordshire's housing stock in respect of excess cold hazards to be significantly worse compared to England as a whole (English Housing Survey).[1] 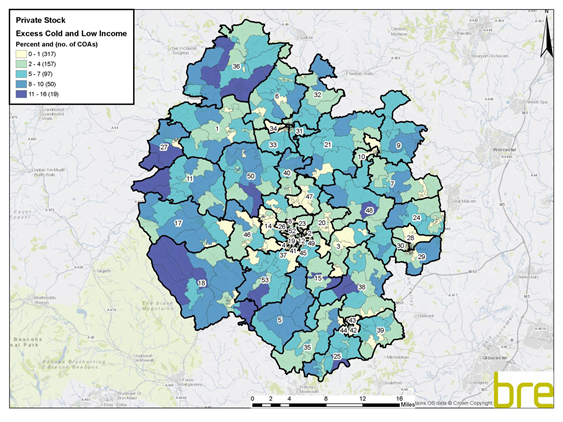 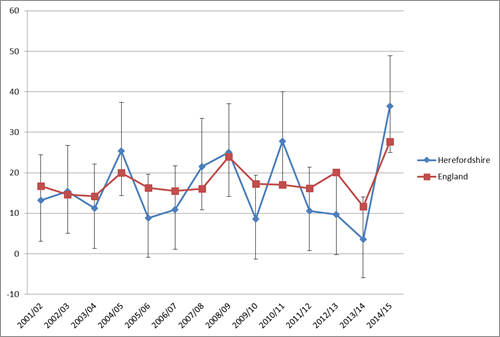 In 2014/15 Herefordshire’s excess winter deaths index was significantly higher than that observed in the previous three years. This trend was in line with what was observed nationally. Following statistical investigation, the Office for National Statistics concluded that the observed spike in excess winter deaths in the UK in 2014/15 was largely due to moderate levels of influenza in the community caused by low influenza vaccination effectiveness (34% effectiveness) and the dominant flu strain being influenza A(H3N2), a strain which is particularly virulent in older people. Provisional data for 2015/16 suggests that the national and regional excess winter deaths index were lower, and back in line with average trends.